Most Christian eschatological views state that the four beasts in Daniel 7 refer to Babylon, Medo-Persia, Greece, and Rome. The latter is the beast with ten horns. This is analogous to the statue in Daniel 2, which assigns the Gold to Babylon, the Silver to Medo-Persia, the Bronze to Greece, and the Iron and Iron/Clay to Rome. Just like the beast has ten horns, so too does Rome’s iron/clay feet have ten toes.

“‘The fourth beast is a fourth kingdom that will appear on earth. It will be different from all the other kingdoms and will devour the whole earth, trampling it down and crushing it. The ten horns are ten kings who will come from this kingdom.” — Daniel 7:23b-24a

Daniel is quite explicit.

The beast is a kingdom made of Iron, which is stronger than gold, silver, or bronze. Rome would become known—at least initially—for its military might, crushing any opposition in a complete unified empire in a way that Babylon, Medo-Persia, and the Greeks did not.

The ten horns of the beast represent kings of Rome. John the Revelator agrees:

“The ten horns you saw are ten kings who have not yet received a kingdom, but who for one hour will receive authority as kings along with the beast. They have one purpose and will give their power and authority to the beast. They will wage war against the Lamb, but the Lamb will triumph over them because he is Lord of lords and King of kings—and with him will be his called, chosen and faithful followers. [..] The beast and the ten horns you saw will hate the prostitute. They will bring her to ruin and leave her naked; they will eat her flesh and burn her with fire.” — Revelation 17:12-14,16

All ten kings do this, in combination with the beast in the city of Rome. But what is the identity of the ten? The Roman Empire never broke into ten pieces, consisted of ten kingdoms, or had ten kings. The Roman Empire is no more. Something is wrong, but what is it? Let’s consider the rest of Daniel’s explicit explanation of the ten kings:

“After them another king will arise, different from the earlier ones; he will subdue three kings. He will speak against the Most High and oppress his holy people and try to change the set times and the laws. The holy people will be delivered into his hands for a time, times and half a time.” — Daniel 7:24b-25

Let’s now see how Daniel describes that king and those three kings.

The Three and Little Horns

While I was thinking about the horns, there before me was another horn, a little one, which came up among them; and three of the first horns were uprooted before it. This horn had eyes like the eyes of a human being and a mouth that spoke boastfully. — Daniel 7:8

Here we have three horns of the first horns that were uprooted by another little horn. It is virtually universal that these three horns are counted as part of the original ten. But ten kings minus three kings makes seven kings. Seven kings to receive a kingdom, seven to share power with the beast, seven to have one purpose, seven to give their power and authority to the beast, seven to wage war against the Lamb, and seven to join in sexual union with the beast and Rome. But the number isn’t seven. It is ten.

If the three are not part of the ten, then the total number of horns—kings—is thirteen, not ten. We know that Rome never broke into ten pieces, but did Rome ever break into thirteen pieces ruled by thirteen kings? Indeed it did!

The Rise of Rome

In 286AD, Roman Emperor Diocletian reorganized the empire into eastern and western sections. In ~292AD, he further divided it into twelve dioceses. By the late half of the fourth century there were thirteen dioceses…

…each ruled by their own vicarius.

Notably, Rome was not the principal city of the Diocese of Italy. Milan would remain the capital of the Western Roman Empire until 402AD. Milan—not Rome—was the chief Metropolis in the Diocese.

The ecumenical Council of Nicaea in 325AD had been tasked with resolving the jurisdictional issue of multiple Metropolitans within a single geographical unit . In order to solve the difficulty, the council cited “the custom of Rome.” Rome—as the lesser city—had previously been forced to carve out a portion of the diocese as its own province, because Milan was the Metropolitan of Italy. Using Rome as precent, the council decided that Alexandria would be limited to Egypt, Libya, and Pentapolis, Jerusalem would carve out its own smaller portion of the Diocese of Oriens (the East) from Antioch, and Antioch would get everything else as the chief Metropolis of the Diocese. Some time later, the civil Diocese of Oriens was split into Oriens and Egypt. This occurred between 373AD and 381AD, when the Council of Constantinople adopted the new diocesean jurisdictions for Antioch and Alexandria.[2] Jerusalem maintained its provincial jurisdiction under Antioch.

“…the catholic church is founded by the grace of God, we also have thought necessary to say what, although the universal catholic church diffused throughout the world is the single bride of Christ, however the holy Roman church is given first place by the rest of the churches without [the need for] a synodical decision” (Council of Rome, III.1).

Yet, Rome had not even had primacy in its own diocese as recently as 358AD, when Athanasius explicitly wrote that Rome was not the chief metropolis:

“…Dionysius of Milan, which is the metropolis of Italy…” (Athanasius, History of the Arians, Part IV, chapter 33).

In 398AD, Jerome cited the Nicaean precedent in his dispute with John of Jerusalem. Jerome argued that Nicaea had given Antioch the totality of the Diocese of Oriens,  but this was an impossible historical anachronism (Jerome, To Pammachius Against John of Jerusalem, paragraphs 4, 10 and 37). Due to the intermediate change in the ecclesiastical geographical unit of the church from provinces to dioceses and the passage of time, Jerome didn’t know that the Diocese of Oriens had split three decades earlier.

After Nicaea, Antioch had been given priority over Alexandria, but the Roman precedent (“the custom of Rome”) had applied to Alexandria and Jerusalem, not Antioch. The real reason for the Roman precedent at Nicaea was lost, replaced with the presumption that Rome always had primacy. Thus was the rise of Rome—to presumptive supremacy from a lesser jurisdiction within its own Diocese to the chief position—caused by historical misunderstanding.

The Rise of the Beast

It is out of the Dioceses of the East, Egypt, and Italy and their respective vicarii and principle cities (Antioch, Alexandria, and Milan respectively) that the the “little horn” of Roman Catholicism arose out of Rome in 382AD and to whom the ten remaining vicarii would ultimately give their power.

“…had eyes like the eyes of a human being and a mouth that spoke boastfully.”

What arose? The Papal Roman Catholic religion with the Bishop of Rome—its Pope—at its fore.

With all that in mind, let’s now reconsider the beast, which Daniel says represents a kingdom: the Roman Empire. The ten kings of that kingdom are both a part of the the beast and separate from it. For how else could the ten Roman kings and the beast share authority? The ten vicarii of the ten Roman dioceses were part of the beast, yet they were not itself the full measure of Roman Empire’s authority. They were only the rulers of the empire’s political arrangement with the three vicarii (of Milan, Antioch, and Alexandria) of the three dioceses uprooted and replaced by another (of Rome). By the 4th century, the Roman Empire was no longer centered in Rome, but Rome would soon return at the center of a new power.

There is no chronological gap in Daniel’s eschatology from Babylon, to Medo-Persia, to Greece, to Rome, to the Roman Catholic religion. These transitions flow from one to another, not only without gap, but often with overlap. The only reason this has not been recognized is because tradition states that Rome would be split into ten pieces, out of which the antichrist would consume three of the ten. In properly counting to thirteen (which in retrospect is seems obvious), the dating difficulties in John’s Revelation just disappear. Consequently, much of the church failed to detect the rise of the antichrist and was deceived. Moreover, the lack of a gap suggests quite strongly that the Roman Catholic religion—and its antichrist—will not fade from the earth before Christ’s return.

[1] The notitia dignitatum refers to both Viennensis, Gaul, and Septem Provinciæ as being essentially coterminous…

…and states that the diocese of Septem Provinciae included…

…which directly contradicts Wikipedia’s assertion that diocese contained only…

Note the regional overlap in the official record. The Laterculus Veronensis described Gaul and Viennensis as separate dioceses in the early 4th century in 314AD . The Notitia Dignitatum…

A.H.M. Jones summarizes the issue in a table of dioceses in The Later Roman Empire 284-602, Vol 3 on page 381, where he utilizes the Verona List (314AD), Festus’s Breviarium, Ammianus’s geographical excursuses, the conciliar lists of the fourth century, the Notitia Dignitatum, the Notitia Galliarum, Polmius Silvius, the conciliar lists of the Council of Chalcedon and Epistles of Leo, the Synecdemus of Hierocles, the schedule to Just. Nov. VIII, Georgius Crprius, and Justinian Code. The chart shows that Gaul and Viennensis were separate in 314AD when there were 12 dioceses matching the initial 12 Diocletian divisions in the third century…. 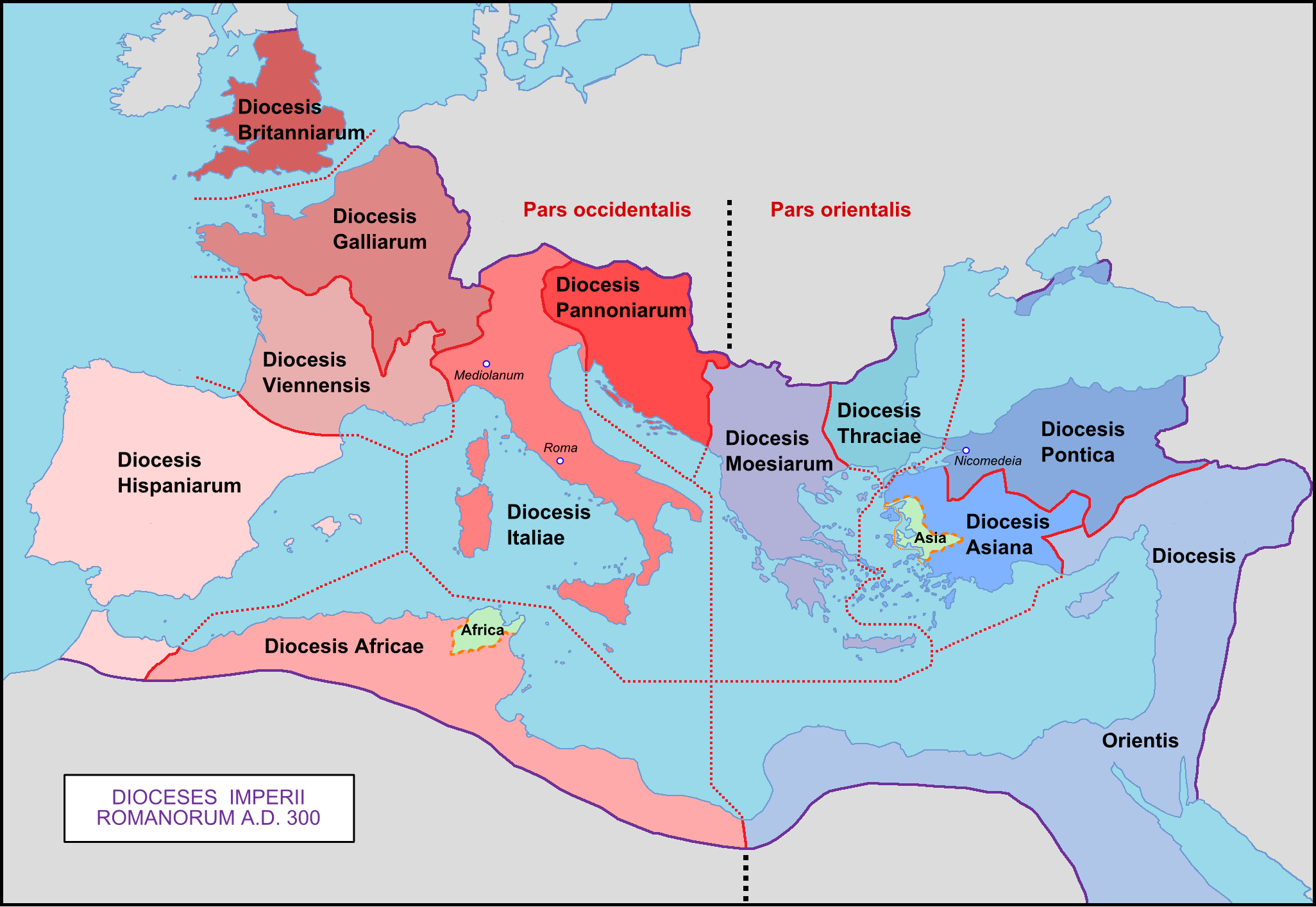 [2] Ibid. p.390: “The original diocese of Oriens was divided into Oriens and Aegyptus c. 367”. Using the evidence gathered by Clyde Pharr (in The Theodosian Code and Novels, and the Sirmondian Constitutions, 1952), the change must have happened no earlier than 373AD. The Council of Constantinople (381AD) used the new diocesan arrangement. Thus the change occurred between 373AD and 381AD.

[3] Whether it actually did by this point in time or Rome just declared it to be the case isn’t known.