NOTE: even if the timeline is wrong—especially the timing of the seals/trumpets/bowls in Revelation—there is little question as to the identity of the Beast, the identification of which does not require any knowledge of the specific scroll, trumpet, and bowl judgments. 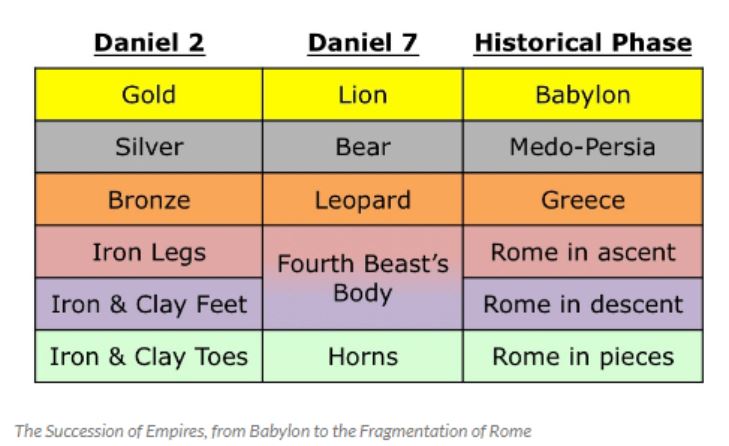 Lifted up after Nebuchadnezzar’s humiliation (605-538BC)

The Apocalypse of John is written:

Formation of Toes
Emergence of Horns

Transfer of the Heavenly Kingdom from the Jews (A.D. 70) which the saints receive. “in the days of these kings shall the God of heaven set up a kingdom, which shall never be destroyed” (Daniel 2:43-44)

Stone strikes the Roman Empire, breaking it into fragments from which the Roman Church would arise: Diocletian reorganizes the empire into Tetrarchs over 12 dioceses in 296AD.

296-382AD: Roman Empire reorganized from 12 (beginning) to 13 (ending) dioceses each ruled by its own vicarii:

Three dioceses vying for supremacy: Antioch, where Peter was first, Rome where Peter was last, and Alexandria where Mark was. Pope Gregory the Great in 590 to 604 A. D. declared it three bishops in a See of One. Pope Bendict XVI declared Peter’s apostolic succession to run through these three.

“And the ten horns which thou sawest are ten kings, which have received no kingdom as yet; but receive power as kings one hour with the beast.” (Revelation 17:12)

Perseverance of the Vaudois in the Alpine Valleys
Little Horn “shall wear out the saints of the most High”
Beast is free to “continue” (“do”) for “forty and two months” [Revelation 13:5] Beast is given “to make war with the saints, to overcome them” [Revelation 13:7] Woman [Church] “is nourished for a time, and times, and half a time, from the face of the serpent [Satan]” [Revelation 12:14]