Every once in a while there is a discussion on morality and ethics that leads to a crystal clear outcome. One of my favorites is the essay by Free Northerner entitled “Abortion, Tomlinson, and Moral Midgets.” Another began when Matt Walsh posed a fairly standard-sounding moral dilemma on Twitter: 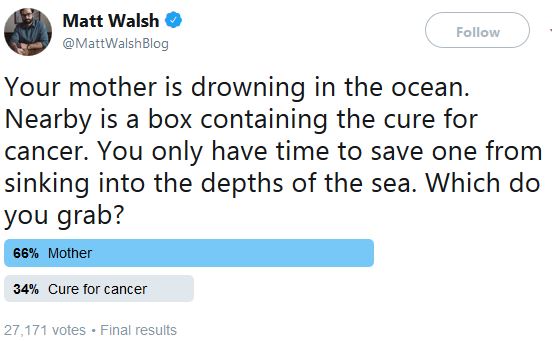 This is not a very difficult question to answer, yet only 66% of people chose correctly. Had Matt Walsh asked…

“Your mother is drowning alongside a doctor who is the only person who knows the cure for cancer. You must save one person, who do you save?”

…then either answer would be ethical, but that is not the question he asked. In this case, under every common ethical standard—except one—the only ethical choice is to save mom. That standard is moral utilitarianism. To clarify the issue, I posed a moral equivalent to the one Walsh gave:

You see, only a moral monster chooses a thing over a human life. It doesn’t matter what that thing is. A human has infinitely more value. Saving the cure is moral utilitarianism. It is the same reasoning that ‘justifies’ knowingly killing humans as part of experiments to find cures. Surprisingly, one brave soul decided to defend the indefensible.

Even countries that support euthanasia at least put on show that the early death is of greater value than the value of continued existence with extreme suffering. But not this one! He thinks that murder is fine, as long as you consent to it.

…unless you are a moral utilitarian. In that case, you must choose to take a life for the greater good. To do otherwise makes you a moral monster.

Christians recognize that all lives have infinite worth, so you must choose to save a person over a thing every single time. But a moral utilitarian must choose the more valuable thing over the person. It’s just a numbers game to them. Their moral stance is literally evil. Christian moral ethics and God’s goodness are both mutually exclusive with moral utilitarianism.

It is unsurprising then that he rejected my argument.

Only moral utilitarians have such a broken moral compass that they can’t even recognize murder as the moral evil that it is. They do not seem to recognize that our criminal laws against murder are not arbitrary, but are based on accepted moral and ethical standards. 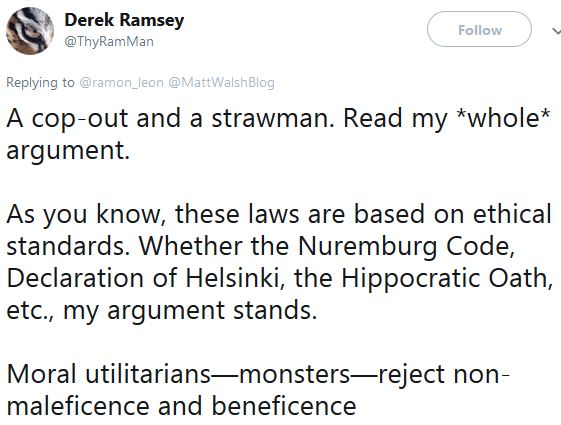 There are many ethical standards, but it is universally accepted that you cannot cause harm to another person (non-maleficence) and any potential risk must be balanced against expected personal benefit (beneficence). In the case of the above moral dilemma, killing mom causes her harm and does not benefit her in the slightest.

So after being faced with these universally accepted ethical standards, certainly my opponent will concede the point. But no… 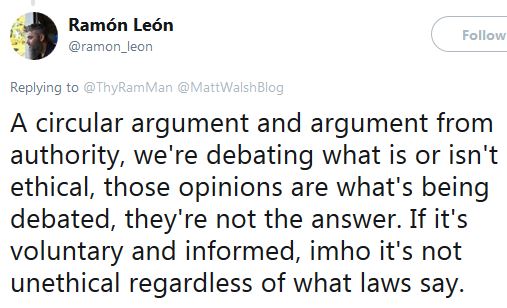 …these ethical standards are apparently arguments from authority. According to this man, they are merely opinions that require extensive debate to even consider. Now, I didn’t believe this could really be the case, so I asked a pointed question:

And I got one of the clearest, most honest responses that I’ve received on Twitter: 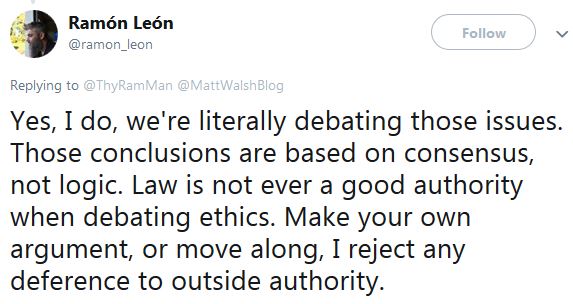 This moral utilitarian, who would have chosen to kill mom, rejects the Nuremburg Code. He literally can’t even condemn Nazi atrocities. Folks, this is what happens when you have no absolute moral grounding and you embrace moral utilitarianism. Most utilitarians won’t actually admit the logical conclusion of their viewpoints, but this one did. It is highly illustrative.

It’s worth noting that despite his rock-solid arguments, he had to block me on Twitter, lest I be allowed to respond to his arguments. But, really, what do you expect from someone who sympathizes with Nazi medical ‘ethics’?