In part 1, we showed that removing hardship in mice populations in the Mouse Utopia experiment led to genetic mutation buildup and eventual extinction. This decline is being mirrored in the demographic decline we now witness in human populations, as described in part 2. We will now examine human intelligence to look for evidence of genetic decline in human populations.

The g factor is a person’s real general intelligence. IQ tests attempt to measure g. We would like to estimate how g has changed over time by how IQ scores have changed. The Flynn effect is the large, sustained increase in IQ scores over time—3 points per decade. This creates an apparent paradox: if g increased 30 points in the 20th century, then the average ancestor from the 1800s would have been borderline mentally retarded. Flynn and others attribute the increases to environmental causes: education, specialization, health, and other social improvements.[1][8a]

“To put this in perspective, 15 points would be approximately the difference in average IQ between a low level security guard (85) and a police constable (100), or between a high school science teacher (115) and a biology professor at an elite university (130). In other words, in terms of intelligence, the average Englishman from about 1880-1900 would be in roughly the top 15 per cent of the population in 2000 – and the difference would be even larger if we extrapolated back further towards about 1800 when the Industrial Revolution began to initiate massive demographic changes in the British population”[6a]

Environment is leveraging huge gains (+30 IQ points) that mask the genetic decline (-15 g points)[8c], but an Anti-Flynn effect is beginning. Meta-analysis shows secular IQ decline in 66 different observations from 13 different countries over 87 years and total sampling of 300,000 persons.[4] The decline is most visible among those of higher socioeconomic status[8b], where potential is tapped out.[13]

In simple terms, humanity got stupider as it got much better at leveraging innate intelligence and learned skills, but the overall gains have started to plateau or decline. 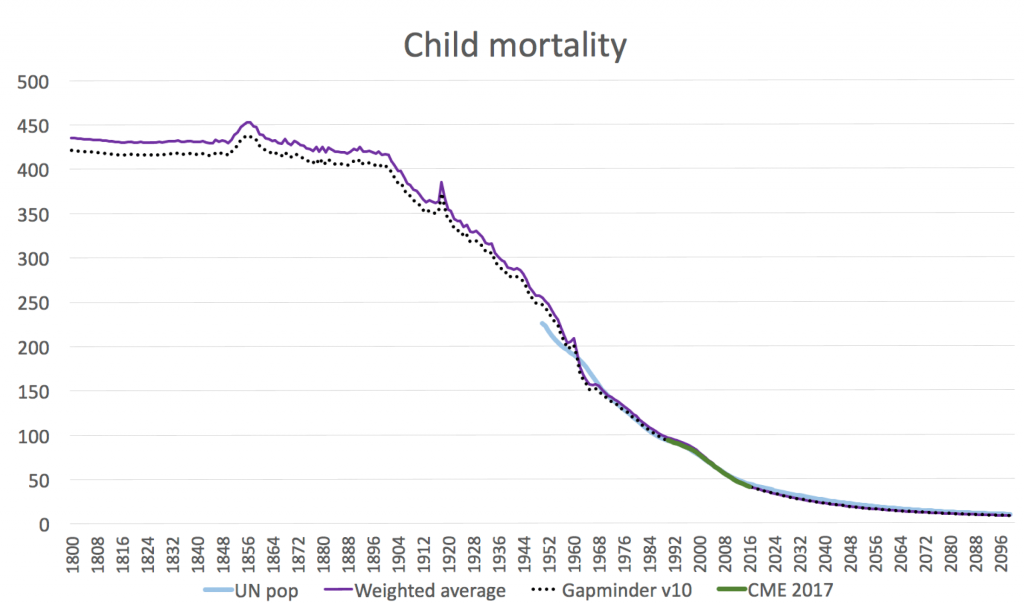 Prior to the Industrial Revolution, child mortality was fairly consistent at ~40%.[11] Mortality rates were highest among the poor, where disease, accidents, starvation, and poor living conditions resulted in very high mortality. In the middle class—the most intelligent group—high fertility rates and lower mortality rates led to a steady selection for intelligence.[6c][14] This changed in the mid-1800s in response to demographic and socioeconomic changes and declining child mortality. Selection pressure, driven by high mortality rates, ended as nearly all babies now survive to adulthood.[6d]

There are two primary drivers behind more than a century of general intelligence decline. The first is dysgenic breeding and the second is mutation accumulation.[12] Neither factor alone is sufficient to explain the secular decline in g.[6b]

Intelligence is negatively correlated with fertility. Those with low intelligence are breeding more than those with high intelligence. However, the Breeder’s Equation does not account for the magnitude of measured change because the most genetically fit reproduce not only less often, but also later in life (reflecting career-first feminism) Those with low g have a shorter gap between generations, effectively lapping those with high g—intensifying the dysgenic effect.[8c] This is illustrated in this humorous clip.

The only significant exception is a group with relatively high fertility that has good genetic fitness associated with health and prosperity: the religious. Unfortunately, this group has been experiencing significant declines, right alongside the decline in g.

Bad genes are being passed on much faster than good genes, the bad overwhelming the good. But even eight human generations is not enough time to account for the entire drop in g. The remainder comes from mutation accumulation:

…until about 1800 only the minority of people with (on average) the ‘best genes’ (i.e. the lowest mutation load) would be able to survive and reproduce; and among the great majority of the population only a very small proportion of their offspring (averaging much less than two, probably less than one, per woman) would survive to a healthy adulthood, reproduce and raise children of their own. In this context, which was for almost all of human history until about two hundred years ago; both new and inherited deleterious mutations were filtered-out, or purged, from the population every generation by this very harsh form of natural selection.[6c]

Many persons with deleterious mutations do not die, but go on to reproduce. Compounding this problem, social changes (reflecting career-first feminism) have increased the average age of parents. The older parents are at conception, the greater number of genetic mutations they will pass.[5] Not only do mutations not get purged, but they are added at higher than historical rates.

Evolutionary theory requires both natural selection and random mutations. Since mutations are almost never beneficial[15], selection is the only way to prevent increased mutational load.[16] Accordingly, absent major societal changes, the decline in g is expected to continue.[17]

Why worry about falling g, when we have those huge IQ gains? We live in a society where those leveraged IQ gains are essential to many professions. A significantly higher percentage of our population must work in more complex professions than could have ever been expected of our agrarian ancestors, yet our ancestors had much higher innate potential. Consider this timely tweet:

No one in 1850 (or even 1950) would have said something so inane as that slide. Heather asserts that those science teachers who cannot posit alternative hypotheses have a dangerous amount of power and should not be teaching it. But who else could do it? There are just not enough people to replace our leaders and teachers with those who have the requisite general intelligence. Our average teacher can do science (high IQ), but they can’t fully understand it (low general intelligence).

In the same vein, after universally recognizing the worth of the Bill of Rights, society is now debating the merits of its previously established concepts, such as free speech or the right to defend oneself from tyranny. In many ways we have vastly exceeded our ancestors, but in other ways, we are just…stupid.

Part 4 will examine what happens when a population lowers ability (general intelligence) and improves environments and raises skills (high IQ).

[3] Woodley, Michael A et al. “By their words ye shall know them: Evidence of genetic selection against general intelligence and concurrent environmental enrichment in vocabulary usage since the mid 19th century.” Frontiers in psychology vol. 6 361. 21 Apr. 2015, doi:10.3389/fpsyg.2015.00361

[12] Studies do not show a correlation between abortion and intelligence decline.

[13] Studies do not show a correlation between declining g and black and white IQ gaps.

[15] It is the claim of various proponents of Intelligent Design that beneficial mutations are nearly impossible to combine into macro-level improvements.

[16] Most mutations have no noticeable effect and are considered benign. However, mutations are not truly random. Previously mutated sites are more likely to experience mutations in the future, increasing the odds of a harmful change.

[17] This is not an argument in favor of eugenics. This would be pretty inconsistent considering that I have adopted three children with significant genetic abnormalities.