I have four children—two boys and two girls—that attend the same public elementary school. Every month the school has a “Student of the Month” for approximately twenty children. Each month the category is different, but the winner is the best-of-the-best at gratitude, compassion, courage, hope, etc. The prize is an exclusive breakfast with the principal. Their picture is published in the school newsletter.

My daughter has won so many different recognition prizes (not just “Student of the Month”) that the children have started to notice the preferential treatment that she receives. So I went back over every published school newsletter that I had and I counted how many girls and boys won. Then I graphed the results. The graph shows a significant bias in favor of girls. On average, between 55%-60% of the winners are girls.

Next I checked the Safety Patrol membership and found that 65% were girls. My son is a member of the Safety Patrol, but he has a friend who was in tears because he didn’t make it in. The demand to join Safety Patrol is quite high and they have to turn away people every year.

In the school’s Reading Olympics, 62% were girls.

There is a similar gender gap in chorus and band. My son, who is an excellent singer, is the only boy of four children representing the school as part of a regional chorus festival.

The school takes part in Girls on the Run.

The majority of teachers in the school are female. The principal and the non-teaching staff are almost all female as well. The janitor and gym teacher are male. The staff listed on the school website includes four males and thirty-two females, a lopsided 1:8 ratio. Unsurprisingly, a school dominated by a female-favoring gender gap is biased in favor of females. You can be certain there will never be any outrage over this.

Are these anecdotes limited to just my particular public school? The research says, “No.”

In June, the New York Times published a piece called “Where Boys Outperform Girls in Math: Rich, White and Suburban Districts.” They found that girls consistently outperform boys on English tests by half to a full grade level, regardless of the socioeconomic status of their parents. The story changes for Math, where the girls perform slightly better (up to a quarter grade level) than boys in lower socioeconomic school districts, while boys perform slightly better (approximately a quarter grade level) in the higher socioeconomic school districts. 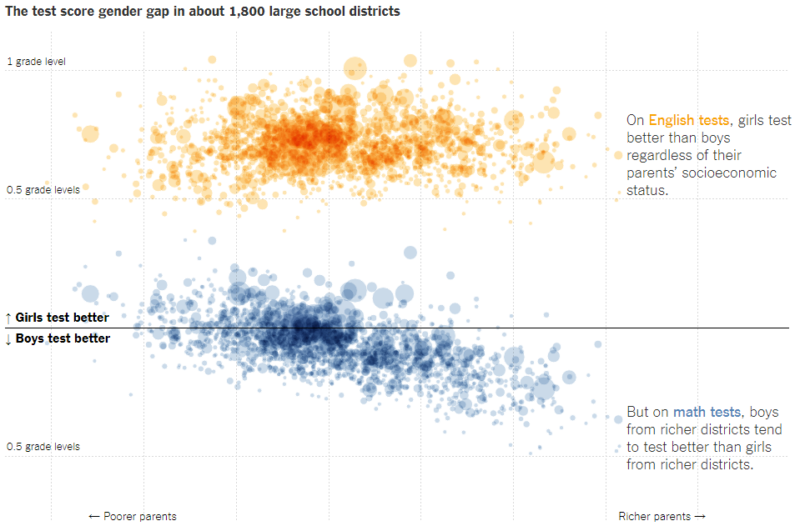 The research shows that there is a huge gender gap in favor of girls. Surely the New York Times is most concerned with closing the gender gap on English tests, right? Of course not. In response to the massive gender gap, the NYT has this to say:

In other words, we’re sure it will all turn out just fine. Don’t worry about it. Look a squirrel!

The cognitive dissonance on this one is so grating that only the tone deaf would miss it. How tone deaf is the NYT? Look at the headline. Does it read that boys are not getting the same opportunities as girls? No. It proclaims that rich, white boys are outperforming girls. We can’t have that, can we? Here is the explanation:

“Although well-off districts encourage boys in math, they don’t seem to encourage girls in the same way. Researchers say it probably has to do with deeply ingrained stereotypes that boys are better at math.”

So sexist rich, white families are deliberately favoring their boys at the expense of their girls. Notice how only rich, white families have deeply ingrained stereotypes. The NYT thinks that girls should perform better than boys in every area. There simply cannot be bias in favor of girls, because girls are better at everything. While the NYT is perplexed because egalitarian rich and white families have the strongest gender gap in favor of boys, it considers that this must be due to hypocrisy. It cannot be because this is the only area remaining in which the biases against boys are the weakest.

The NYT is lying to you. Public schools are the enemy of boys. They tolerate their existence because they legally have to. But make no mistake, the NYT would prefer if boys got worse grades so that girls could get comparatively better scores.

Rich white families fight harder than most to make sure their boys have opportunities because no one else is fighting for boys. If you are the parent of a boy, understand these limitations. Fight for your boys. No one else is going to do it.